The Allegory of Pinnochio 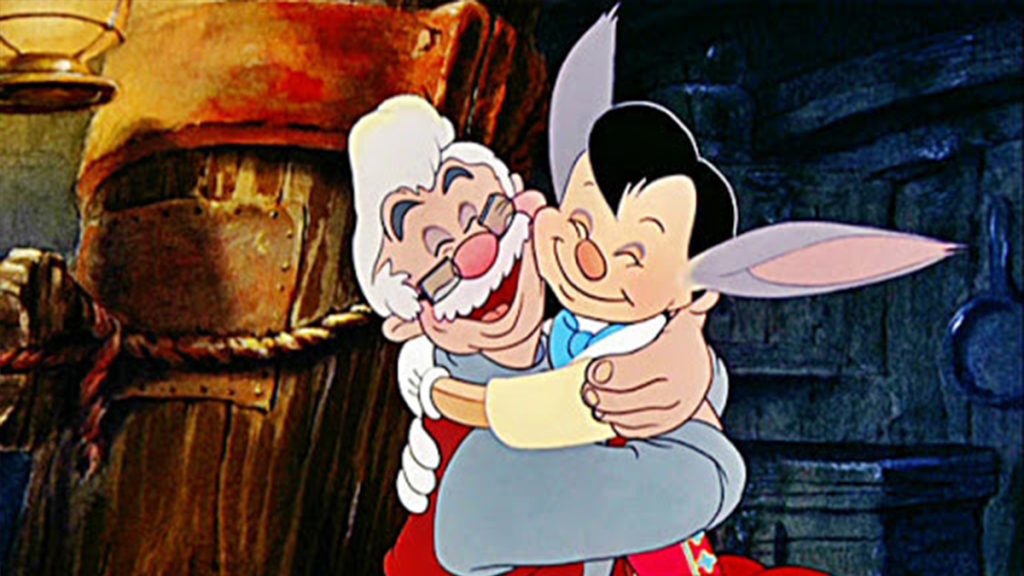 You can argue with me if you'd like, but Pinnochio is the best Disney movie ever made! #FightMe. To me, it is the Gospel told in a different way, it is the perfect allegory for those who are going to receive Confirmation. There are so many layered truths that I absolutely love watching it.

Geppetto represents The Father Creator. He makes a puppet which is in the image of a son but is made out of wood (real sons are of the same substance of the Father, flesh and blood). Geppetto sees that he has created something beautiful in his own image, but that it is indeed lifeless, just a toy, just a thing. It is not enough for Geppetto to simply have a thing, he has plenty of things, and doesn't need another one. We see Geppetto's heart revealed because he wishes that he had a real boy. He desired a loving relationship.

Pause the story for a moment and consider how creepy it would have been if the entire movie played out in a way where Geppetto's wish was never made. Imagine the old man playing with a marionette, acting as if the puppet were truly a son. He would make it say, "I love you papa," and would respond to his own imagined character, "I love you too son." This would be a gross distortion of relationship, we would call Geppetto creepy, weird, perhaps even insane. In order for true love to exist, the other party must be free. If either party is not free, we get a restraining order.

The story goes that Geppetto wishes for Pinnochio to come to life (to have free will) and so it happens; now Pinocchio can sing, "I've got no strings, to hold me down." Now Geppetto has a person to love and he loves him 100%. They rejoice together in this new-found relationship. It is almost instantly that the newly created, ignorant, Pinnochio, who has just come to life, immediately takes Geppetto's love for granted and proceeds to do whatever he wants.

Sure he loves Geppetto, but he quite literally does not follow a single rule Geppetto gives him. He was given a conscience (Jiminy Cricket), but he ignores that most of the time too in order to pursue his own pleasure. Geppetto does not love him any less for this, but rather rejoices in the miracle of his life at all times.

Without overdoing the allegory, you can watch the film on your own, but Pinnochio's sins lead him constantly into captivity into which he has no power to deliver himself. He cries out several times in vain for the help of his loving father who he previously ignored and left behind. Geppetto never ceased searching for him and calling for him, but Pinnochio had, in a manner of speaking, kept moving away from Geppetto. Pinnochio had also discovered that his sins had begun to warp his own image, his nose grew long with the telling of lies and he needed special graces for it to return to normal. At Pleasure Island he irreversibly begins his transformation into a mule, he sprouts ears and a tail, and begins to look more like a "Jackass" than the son of his maker.

It is at this point that Pinnochio stops hoping Geppetto will find him but instead he longs, as a prodigal son, to return to his father despite his shame. My absolute favorite part of this movie is the reunion (In the belly of the whale, a symbol of death), Pinnochio has his donkey ears hidden under his hat and his tail tucked in. When Geppetto sees him, Pinnochio looks back with all his sins hidden, and then he removes his hat, shows his ears, and turns to show his tail. There is a moment where Geppetto is startled at his creation, but alas he does not bock but sweeps his beloved child into his hand and rejoices with him as he did when he was first made (see picture above).

Then of course there is the great escape (an amazing symbol of baptism, from death in the belly of the whale to new life). This is where Pinnochio.... SPOILER ALERT... lays down his life out of love of his father. It is only then, that the puppet, the image of the son, has proven himself worthy of being a true son. So he is given the Flesh and Blood (Eucharistic Image) of the True Son, and is forever changed from the image of a son to the reality of a son.

You don't have to agree that it is the best Disney movie ever, but you might admit that it retells the greatest story there is, the Gospel.

As you approach Confirmation, or remember your own, remember that you are Pinnochio and Geppetto (God) loves you at 100% no matter what choices you make. When you are lost, God will seek you, when you defame your own creation through sin, God will see his beloved child despite the appearance, and He will embrace you as whole-heartedly as on the day of your creation. This is not a day about knowing all the right answers about Catholicism, or about pretending you are some form of holy and unbroken soul. This is the day when hopefully you have escaped the enslavement and imprisonment of "pleasure island," recognized your own brokenness, loneliness, and weakness, and have decided to find your Father who has always offered you love, rescue, and refuge.

So when you are asked the questions, "Do you believe in God, the Father Almighty... Jesus Christ, his only begotten Son... The Holy Spirit, the Lord, The Giver of Life... And the One, Holy, Catholic, and Apostolic Church," I want you to mirror that with another question. Ask yourself if you not only "Believe" in God but if you "Love" God. You are like Pinnochio, broken and mischievous, but are you willing to love your maker? The one who unfailing loves you, provides, for you, and will always search you out when you are lost? The one who would even go into death itself to find you? The one who will accept you and love you exactly as you are? No blemish, sin, or failing can diminish that love. The relationship is being offered, will you accept it? Will you allow it to flourish?

When we say "I do" we should be saying it to belief and love. You are professing that you are accepting this loving God who has set you free in the humble hope that you might choose to love Him back. In Confirmation we resolve to pursue and find our God with our whole heart (if you have found God, it is the resolve to grow in that relationship). This is not the stage where we cease to be a puppet without strings, it is the stage where we share our creator's desire that we truly become what we were made in the image of.

I will end by sharing a quote from St. Augustine that my mother shared with me at my confirmation. It has remained a guiding light for me ever since. I hope you might enjoy it too.