Father Dan O'Connell has always had an avid interest in the strength and presence of God's Word and its power to build up the human person and transform their lives. It is true that in God's Word we live, move and have our being. Father Dan is a priest of the Archdiocese of Boston He was ordained in 1983 and has served in parishes in Lowell, Quincy, West Newton, Cambridge and Downtown Boston. In 2012 he returned as Pastor to Corpus Christi-St Bernard parish now serving the people of Auburndale, West Newton and beyond!
In addition to pastoral duties he has worked as Associate Director of the Office Spiritual Life located in the Archdiocese's Pastoral Center. His duties have included Retreats in parishes, schools and colleges as well as parish renewal and catichetical workshops.
He teaches homiletics through the office of Permanent Diaconate of the Archdiocese.
In 1988, he studied the art of homiletics at the Institute for Preaching at Catholic University in Washington, D.C. He is a member of CATH and attends yearly meetings for those who teach Homiletics at the University of Notre dame.
In 1989, Father Dan shot the pilot episode of Catholic TV's award-winning show We've Got To Talk. It is currently the longest-running studio series in the history of the CatholicTV Network. Father Dan is the recipient of the 1997 Proclaim Award from the United States Conference of Catholic Bishops for Excellence in Catholic Television Broadcasting and the 2012 Telly/People’s Choice Award through the You Tube Channel. 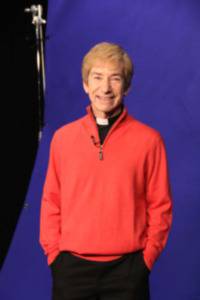